Those universal apparatuses have been developed for implementation in engineering and applied geophysics in studies of electrical properties of geological data. As we all are aware of the success of those methods in discovering cavities and water levels in layers. The maximum depth of study using the equipment is around 160 meters ( or 524 feet), and can be increased to 240 meters ( 787 feet) in case of long line.

Those apparatuses can be used in the following electro resistivity methods of direct current:

Electrodes, included in the equipment, are of two types: non-polarizing electrodes Ø 16 (know-how), which are used as current and potential electrodes according to schemes, shown on the graphics below; standard rustproof chromium-nickel electrodes Ø 7

Power-supply UPS provides electricity to the apparatus and the laptop. 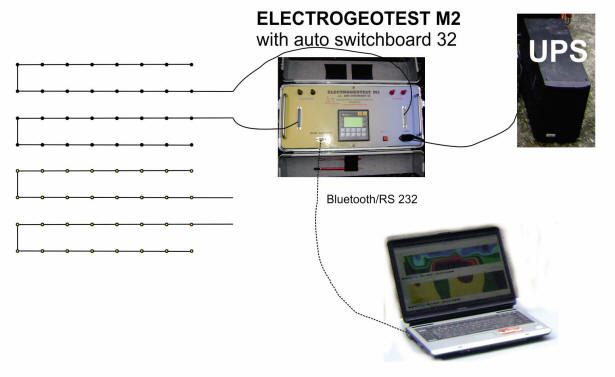 Apparatuses guarantee control over the measured data and the results to fix errors in real time, while allowing connection with a computer and an office.

The combinations are preset in the switch in the form of an Excel table, similar to

Data is saved in the form of an electronic table Excel in the equipment’s memory and can be viewed in real time on the switchboard’s and computer’s displays. It looks similar to the one below: 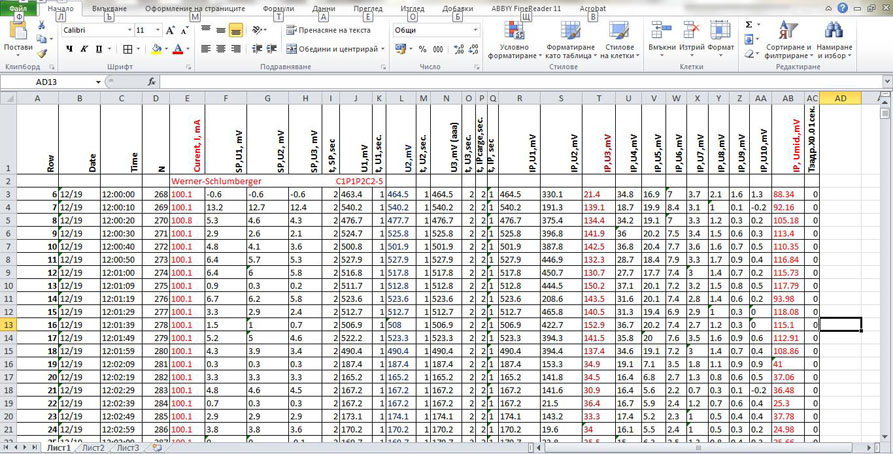 where in separate columns are entered number N of the measurement; date; time in seconds; number of the schematic placement of the electrodes; currency in mA; background SP in mV for a certain time, given in three equal intervals; three columns for measuring in exact given time of ΔU after switching on the mains up to 180 sec, where after each column follows another one, in which the time of the ΔU measurements is recorded; a column, where the charging time of induced polarization IP is entered in seconds; a column for the given time for IP integration in seconds; ten columns, containing IP values in equal intervals of the given integration time IP in seconds; integral value of induced polarization for a given time, delay (the moment, after which starts IP logging, after turning off the electric current) up to 100 sec and 100 msec interval.

Table’s memory can contain up to 1000 logs and after the free spaces have finished it begins writing over the first data logs. The log memory can be upgraded to 5000 combinations upon request. The computer can record an unlimited number of logs.

With a suitable computer application for a certain scheme modification automatically can be calculated the surface potential SP, where when measuring SP only, following the scheme of potential and potenital’s gradient, the device is set to let current I = 0 or let current in for time T = 0. Also are calculated the quasi-electric resistivity ρ app. = ΔU/ I and induced polarization η= ΔU/ U and a file is prepared for processing with the applications RES2DINV, RES3DINV, ZOND RES2D, ZOND RES2DA, ZOND RES2.5, ZOND RES3D, ZOND SP2DP, ZOND SP2D, ZOND RES3D, RES2DMOD, RES3DMOD, X2IPI, IPI2WIN, IP1D, IP2D, RockWorks 15, Slicer-Dicer and others, to get an electrosection, thomographic section and axonometric projection in 2D and 3D space.

All parameters needed for the survey can be predefined from the computer or the apparatus’s control panel, while at the same time is set the time between the measurements from 1 to 1000 seconds in order to prevent a following-up induced polarization.

In case of constant power supply of ~ 220 V the equipment can work practically for unlimited time.

Showcases of the equipment application in various engineering-geological, hydro-geological and other tasks, can be found in this website’s Solving of geologic problems with electrical and seismic methods of applied geophysics section.

Below is shown an example of a lithological section investigation 93 meters of length at a varying depth up to 80 m. at a single layout of 32 electrodes according to four pre-determined schemes.

The servicing of electrodes and measurement can be performed by one person and a driver for less than 100 minutes.

The collected data processing and interpretation using the above mentioned computer programs can be completed for less than 60 mins., for the four schemes.